12 guests, · 0 Showers, · 0 Wash Basins
One of the few available 50 metres semi displacement aluminium yachts in the market with variable speed from 12 knots up to 22 knots.The choice of a contemporary, almost minimalist design contrasting with exquisitely tasteful furniture makes ZALIV III unique and original. Materials and colours of the interiors enhance the sense of space. The top deck is fitted with a large Jacuzzi along with TV on fly. She has been built with the most modern equipment (zero speed stabilizers, 3 large generators, special entertainment system and electrical curtains adjusted with the MAIN LUTRON MONITORING SYSTEM, special lighting design, special and extra insulating level, blue hull and many other features.

CAPTAIN – GKONTZOS KONSTANTINOS TZIOVANI
Konstantinos was born in 1984 in Arta, Greece. He graduated from the Merchant Marine Academy in Epirus, Greece in 2007. He holds all Certificates such as Advanced Fire Fighting, Tanker Safety, Ship Security Officer, Life Saving Appliances, Crisis Management/Simulator/Ship Handling, Management of Change, Medical Care on Board Ship, Passenger Safety, Specialized Training for ‘Gas Instruments’, for ‘RO-RO/PASENGER SHIPS’ and has also a speedboat license. He has 11 years of experience in yachts of all types and sizes and has travelled in East & West Med and Croatia. He joined Zaliv III in 2012 and he is a valuable member of the team. With his extensive knowledge and pleasant personality he ensures a successful charter. Konstantinos speaks fluent English and he has a passion for traveling, diving and all water sports.

CHIEF OFFICER – IOANNIS GRIMPILAS
Ioannis was born in 1983 in Athens, Greece. He holds a Captain’s diploma and a Bachelor in Business Administration. Ioannis has acquired numerous Certificates including RYA powerboat certificate, Ship Security Officer, passage planning certification, Bridge Simulator & Use of leadership & Managerial Skills, Advanced Fire Fighting, Proficiency in survival craft, rescue boats, Medical Examination, Specialized training for personnel on board Ro-Ro Passenger Ships, Advanced training for Oil Tankers etc. He started his career on cargo and tanker vessels and joined yachting in 2014 onboard M/Y Al Mirqab. Ioannis is a great team player and always available to assist with Jet skis and water sports equipment and ensure endless fun for guests of all ages. Ioannis speaks fluent English; he is a PADI diver and enjoys all water sports.

CHIEF ENGINEER- THODORIS KIKIDAS
Thodoris was born in Greece in 1974. He holds an A Class Engineer Diploma and all the necessary certificates; Higher Level Training, Advanced safety and Firefighting, ERM/ERS, RO-RO Passengers ships V/2, V/3. He started his career in 1994 onboard merchant ships and entered the yachting industry in 2003 serving on charter yachts such as M/Y Gina M, M/Y Celeste & M/Y Allegra. He speaks fluent English. He is married and in his free time enjoys computers and music.

ENGINEER – CHRISTOS GEORGOUSIS
Christos was born in Greece in 1994 and he holds the 2nd Engineer Certificate. He graduated from the Merchant Marine Academy of Macedonia with all the necessary certificates and he has attended various seminars and trainings over engineering. He has experience on ocean going ships and charter yachts. He speaks fluent English and he holds a speed boat license and loves all water sports.


CHEF – VASILIS ATHANASIOU Vasilis was born in 1987 in Greece and is a graduate of Le Monde Institute of Greece. In 2020 he attended and gained the certificate of “The professional Course in Innovative cuisine” from the Basque Culinary Center in Spain. During He has attended numerous gastronomy seminars such as Haute Cuisine, Art de la Table, Food Styling, International Cuisines, The Best of Alain Ducasse and many more. Vasilis was also awarded with the first place at three Food Carving Competitions in 2014 & 2015. Vasilis started his career at famous hotels and restaurants in Athens and in 2015 he joined the yachting industry. Prior joining Zaliv III team in 2021 he has worked onboard M/Y Ledra, head chef on M/Y Chakra and M/Y Kintaro. During winter period Vasilis is a Chef Professor at Le Monde Institute. He is an expert in International cuisines but his great love is the Greek and Mediterranean gastronomy. Vasilis is well versed in haute cuisine food preparation but equally comfortable with simple, straight forward cooking with passion and respect for quality and detail. Chef Vasilis speaks English, French and Greek and ensures that dining onboard M/Y Zaliv III will be an unforgettable experience.


CHIEF STEWARDESS – BELEA ADRIANA ANA
Adriana was born in 1979, a Romanian national. She has certificate in Economics and Administrative Studies. She has also studied for 3 years at “Fundeni Nursing College” and during her practice she was nurse in the military hospital for one year. She has attended beauty courses, seminars in photography and PYA GUEST Yacht Interior, Yacht Interior, Basic Food Service & Wine, Bartending &Mixology Introduction Modules. She has worked in luxurious restaurants and hotels, onboard cruise ships since 2005 and two years onboard M/Y Magna Grecia. She joined Zaliv III‘s crew in 2015 and has become a valuable team member. She is a very active and hard working person who always smiles and guarantees impeccable service to all guests. She speaks fluent English, Romanian, Greek and basic Spanish. She holds a speedboat license and loves photography, reading and cooking.


STEWARD - VIC ARQUELADA
VIC was born in Philippines and he has been living in Greece since 1991. He joined yachting in 1997 on M/Y ZALIV till 2002, M/Y ZALIV II till 2003 and now in M/Y ZALIV III. Before Yachting he had 6 years’ experience in restaurants and hotels. Vic speaks Greek and English He is married with two children and he likes swimming and listening to music.


STEWARDESS – RECSELDA – ROXY RACOMA
Roxy is a Philippine national, born in 1978. She is working in hospitality in Greece since 2007 at luxury hotels such as Hotel Grand Bretagne and entered yachting in 2017 onboard M/Y Hasabi II gaining great experience. She joined Zaliv III in 2019. Roxy is amazing with children as in the past she has worked successfully as a nanny. She is a great team player and an enthusiastic person who is ready anytime to offer the best service to the guests. She speaks English and she loves cooking.

SPA THERAPIST – NIKOLETA KANDILA
Nikoleta is a Greek national, born in Germany and holds a degree in Physiotherapy. She has worked in renowned Hotel Spa and Resort Spas and onboard charter yachts as well. Nikoleta has a wide knowledge of various facial treatments and massage types such as therapeutic, wellness, pregnancy, relaxing etc. and offers them to all guests during their charter. She speaks English and Greek and in her free time she enjoys cinema and reading.


BOSUN- DIONYSIOS FOTIOU
Dionysios was born in Katerini, Greece in 1966. He has 18 years’ experience in the Ocean going Merchant Ships. Since 1992, he has worked on various motor yachts such as M/Y CARMEN FONTANA, M/Y CARMEN SERENA, M/Y ALMYRA, M/Y HIMERA, M/Y IRIS, M/Y ZALIV II and till now in M/Y ZALIV III. He holds a certificate of Bosun, Lifesaving, Fire Fighting, Speedboat license, Bunkering Responsible and Rescue. He is married with one child. Dionysios speaks English and in his free time he likes fishing and swimming.

BOSUN- VASILEIOS KARATHANASIS
Vasileios was born in 1982 in Greece. He holds a Sailor’s License and Life Saving & Fire Fighting, S.T.C.W. A-V/3, A-V/2, and Ship Security Officer (SSO) Certificates. He entered yachting in 2013 and since then he has worked onboard M/Y TROPICANA, M/Y CUDU, M/Y ENDLESS SUMMER and M/Y APANEMIA. Vasileios is full of willing and team spirit. He speaks English. He is single and enjoys sports and travelling. 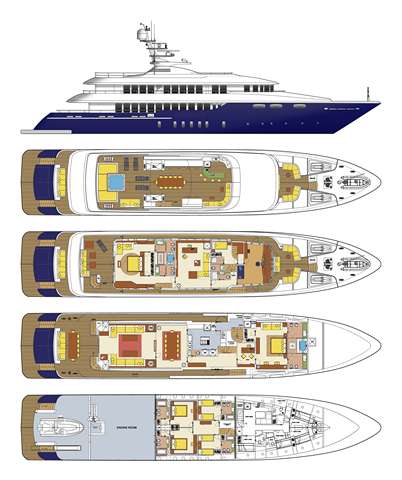