Jonathan Barrett was born in South Africa and grew up in Durban where he spent most of his youth living aboard his parents’ sport fisher in Durban Harbor. This is where he learned how to sail, surf, skateboard, and wakeboard at a young age, and where his passion for the ocean started. Passionate about yachting since childhood, he began his professional career in the industry in 2013 as a mate and is now Captain of M/Y NO BAD IDEAS alongside his wife, Xanthea van Wyk, the Chief Stewardess. He is also working toward his 500GT Masters License at this time. Captain Jon’s pastimes include golf, playing guitar, discovering new restaurants, and surfing, especially exploring new places with secret surfing spots. Of all the destinations he’s traveled to, the natural beauty of Panama has captured his heart, and he plans to open a surfing camp there when he retires from yachting.

Xanthea van Wyk was born in Pietermaritzburg, South Africa, and grew up in a small city on the North Coast Kwa-Zulu Natal. Her passion for the hospitality and tourism industry began in her youth while traveling all over Southern Africa and visiting game parks with her family. After graduating from college and meeting her husband, Captain Jonathan Barrett, she gained several years of land-based hospitality experience while managing game lodges in Namibia before transitioning into the yachting industry. In her leisure time, Xan enjoys reading, snorkeling, running, and paddle boarding. She is passionate about wildlife and loves traveling around the world to observe species in their natural habitats. Following her retirement from yachting, she plans to create a unique collection of glamping-style lodgings in Panama.

Peter Hardwick was born and raised in Durban, South Africa, where his love of the outdoors and obsession with the ocean began. The oldest of three boys, he spent his days surfing, free diving, fishing, and swimming. He learned to sail as a hobby and started his yachting career as a deckhand before becoming a bosun in 2015, working on private and charter vessels in the Caribbean, the Bahamas, the Mediterranean, South and Central America, Alaska, and both coasts of the United States. While he is continuing to build his skillset in the industry with plans to become a Captain, he excels at managing and training deck crews, overseeing all exterior duties, and ensuring all safety protocols are in place. His friendly and hard-working spirit is a welcome addition to the crew of M/Y NO BAD IDEAS. When not working on the water, you’ll find Peter diving, spearfishing, surfing, or skiing

Boudine Nagel was born and raised in Johannesburg, South Africa, and has always been drawn to the outdoors, travel, and the sea. Growing up she spent her time playing soccer, swimming, snorkeling, drawing and learning about new people and places. After visiting her sister in the Bahamas, Boudine decided to join the industry, beginning as a Third Stew in 2016. She brings her passion for the industry and outgoing nature to her role as Second Stewardess aboard M/Y NO BAD IDEAS, ensuring a memorable experience for charter guests. A team player who also works well independently, she is always seeking opportunities to acquire new skills and further her yachting career. When not working at sea, Bou enjoys spending time with family and friends, surfing, paddle boarding, snorkeling, and traveling to new places.

Katrina Lynch was born and raised in the small seaside town of Noosa Heads, Australia, and the ocean was always a part of her life. After completing her degree, she decided to pursue a more adventurous lifestyle, see the world and get involved with marine conservation efforts. During a seven-month trip on a sailing yacht that traveled through the Caribbean and Central America before crossing the Pacific Ocean to French Polynesia, she discovered the world of yachting and fell in love with it. From there, she headed to Mallorca and explored the industry, then embarked on her yachting career. Over the past two years, she’s worked on everything from sailboats to superyachts as well as explorer/research vessels. Kat hopes to one day skipper a small sailing yacht or catamaran and explore remote destinations, or to further her work with research vessels to create a positive change. An explorer at heart, one of her favorite places that she’s visited so far is the secluded paradise of Suwarrow, an atoll in the Cook Islands that’s a protected marine reserve and uninhabited by humans six months of the year.

Education/Certifications: Ships Cook Certificate (France), Food & Hygiene Level 2, Culinary Art Training, Molecular Cuisine Training, Thai & Japanese Cuisine Master Class, Nordic Cuisine Master Class, Catalan & Valencian Cuisine Master Class, Sicilian Cuisine Master Class
Languages Spoken: English, Russian, Basic Spanish
Chef Olga Lupu hails from Ukraine, but is based in Nassau, Bahamas. Her background in the industry includes nine years on cruise ships, private yachts and charter yachts traveling through the Mediterranean, Florida and the Bahamas. Now, she is pleased to welcome you to her table aboard M/Y NO BAD IDEAS during your next charter. Each day is an adventure in food for Chef Olga, and dining options are limitless with her in the kitchen -- from buffets and casual meals to classic platings and multi-course tasting menus. She offers diverse menu options and styles of plating catered specifically to the food preferences and dietary requirements of guests. Her specialties include Mediterranean, Italian, French, Spanish, Nordic, Asian, Greek, Middle Eastern, Russian, some South American and Molecular cuisines, and she can accommodate all diets, including gluten-free, lactose-free, vegetarian and vegan. She was previously aboard 112' BELLA CONTESSA. In her leisure time, Olga enjoys open-air cooking, sailing, jogging, yoga, and Latin dance.

Niel Rossouw was born to a winemaking family in Paarl, Western Cape, South Africa, and raised on a farm in the Breede River Valley. As a child, he spent his time mountain biking, hiking, working in the wine cellar, and playing rugby at school. Farm life and working with the wine machinery sparked his passion for engineering and following high school, he moved to Cape Town to study toward his diploma in Mechanical Engineering. At the same time, he became the lead guitarist in an oldies cover band, playing weddings, pubs, festivals, and more. After working as an engineer across the continent of Africa for six years, he realized the joy he found in travel and decided a career in yachting would allow him to work while seeing more of the world. His first marine engineering assignment had him crossing the Atlantic on a sailing catamaran from Cape Town to Grenada alongside three other crew members. As much as he loves the sea, he is equally passionate about renovating and general woodwork. His goal is to complete his
Chief Engineer 3000GT license and start working on a rotational basis so he can have time on land to start doing home renovations. Playing acoustic and electric guitar is still his biggest hobby, but Niel also loves snorkeling, reading, and working on his home aquariums.

Thorsten Klocke was born and raised in Cape Town, South Africa. Growing up, he spent most of his time outdoors, whether he was surfing and swimming or cycling and playing sports. His career in yachting began in 2018 after a friend shared their positive experiences in the industry, and one of his first assignments was an Atlantic crossing on a sailing yacht from the Mediterranean to Florida. Thrilled to join the crew of M/Y NO BAD IDEAS as deckhand, Thorsten’s goal is to achieve a higher engineering ticket and eventually his yacht master certification. When not working on the water, you’ll find him rock climbing, hiking, or surfing. He also enjoys flying his drone and editing the video footage that he captures. 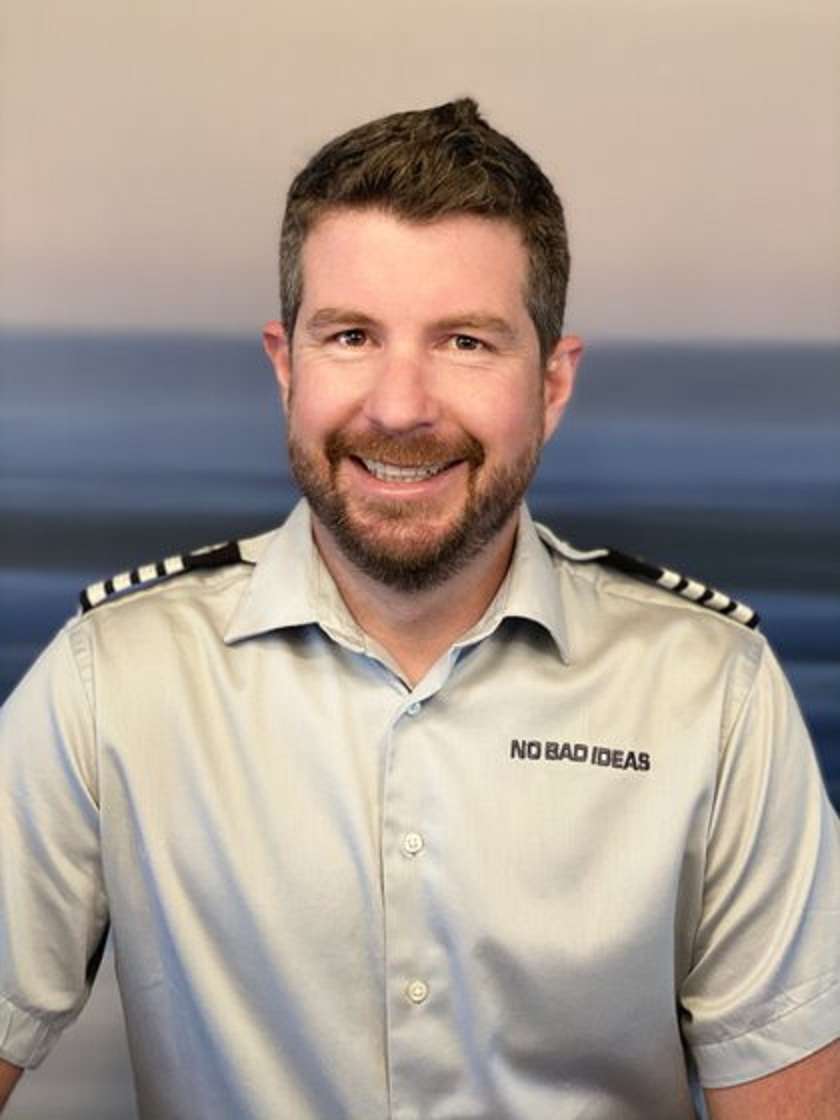 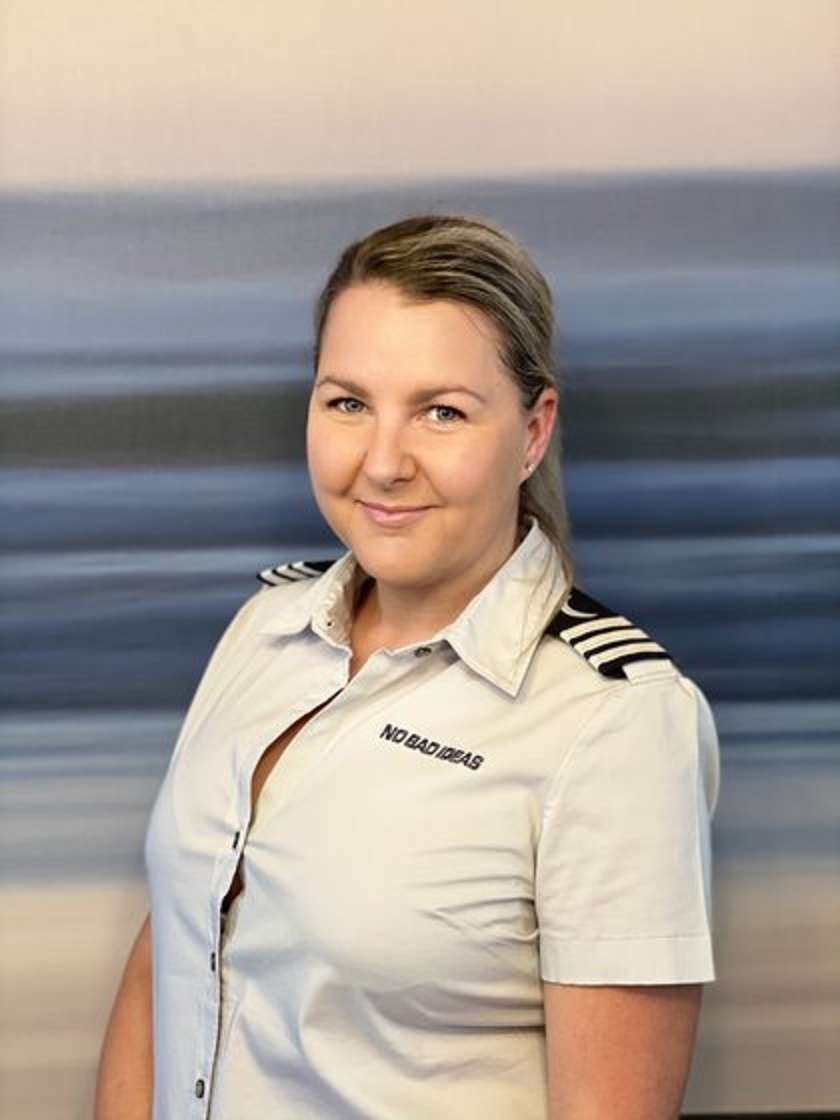 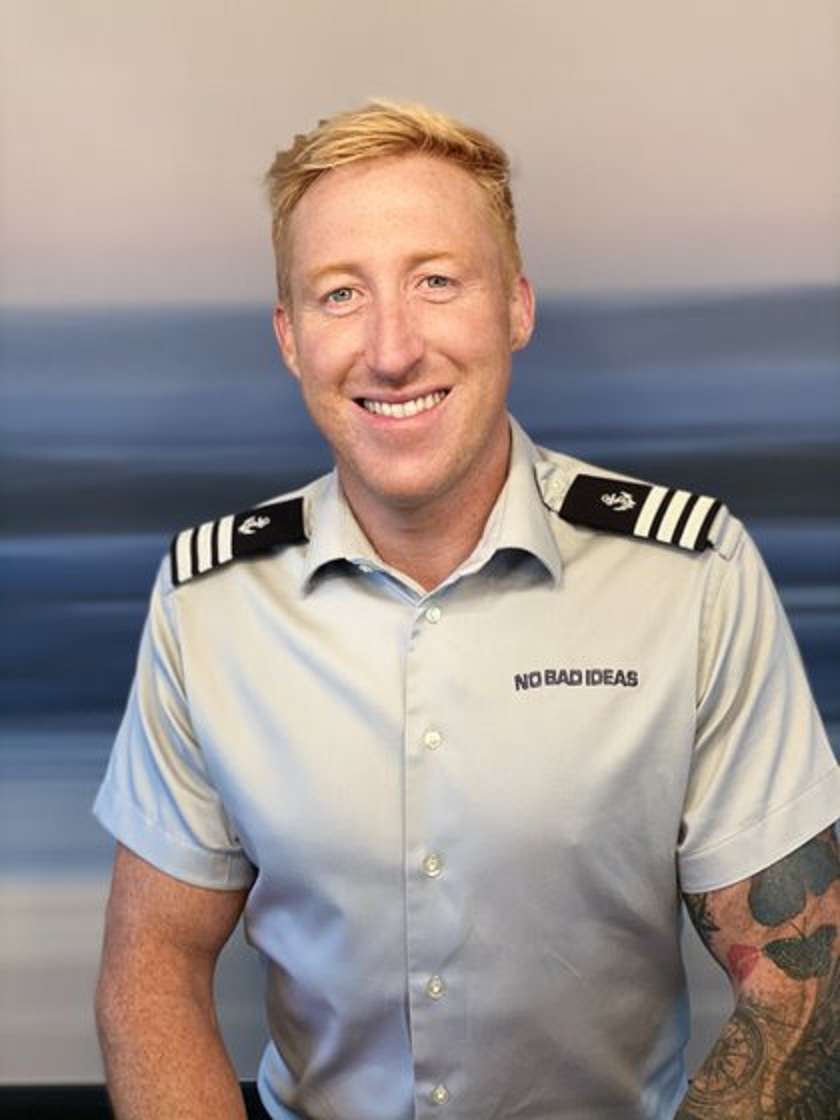 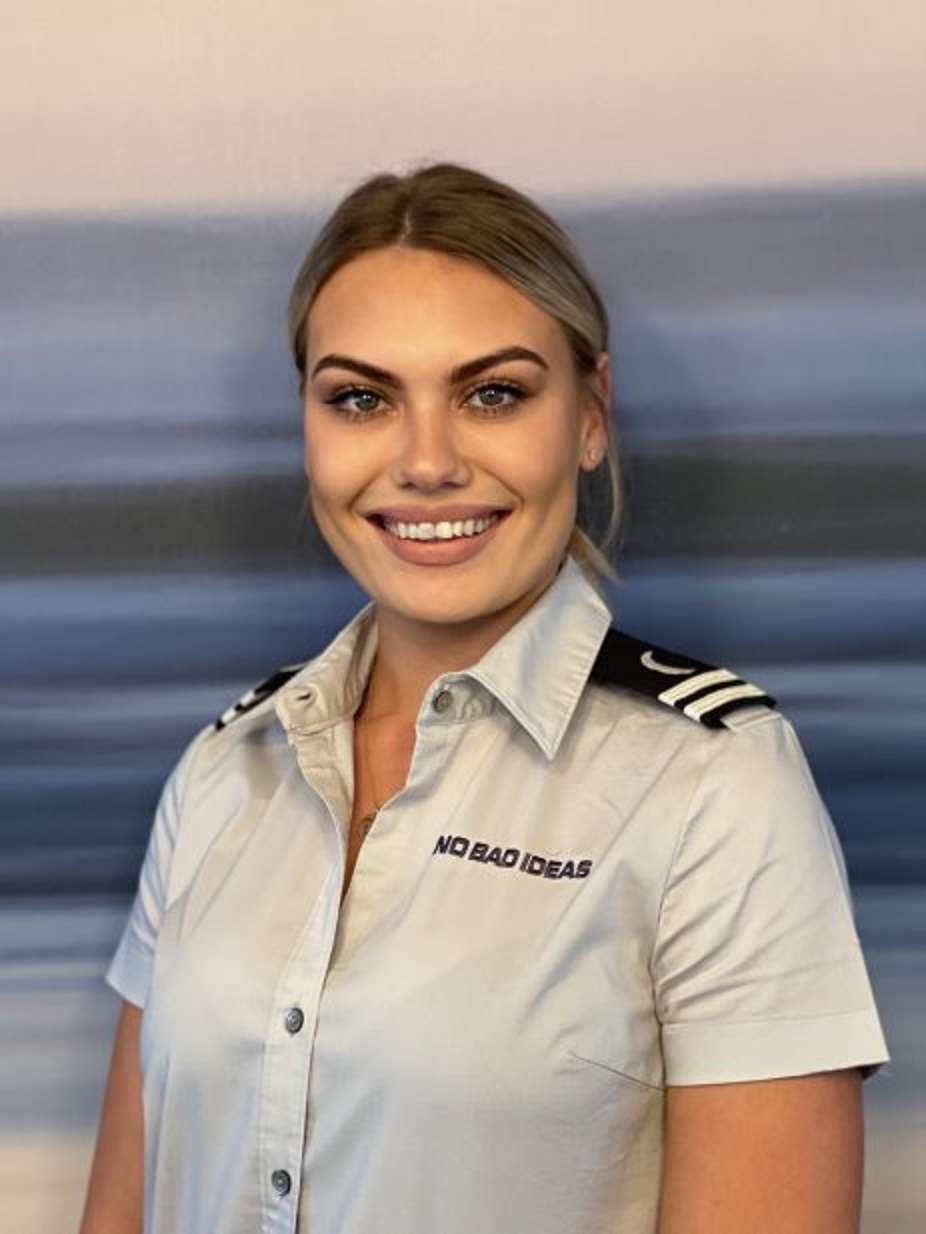 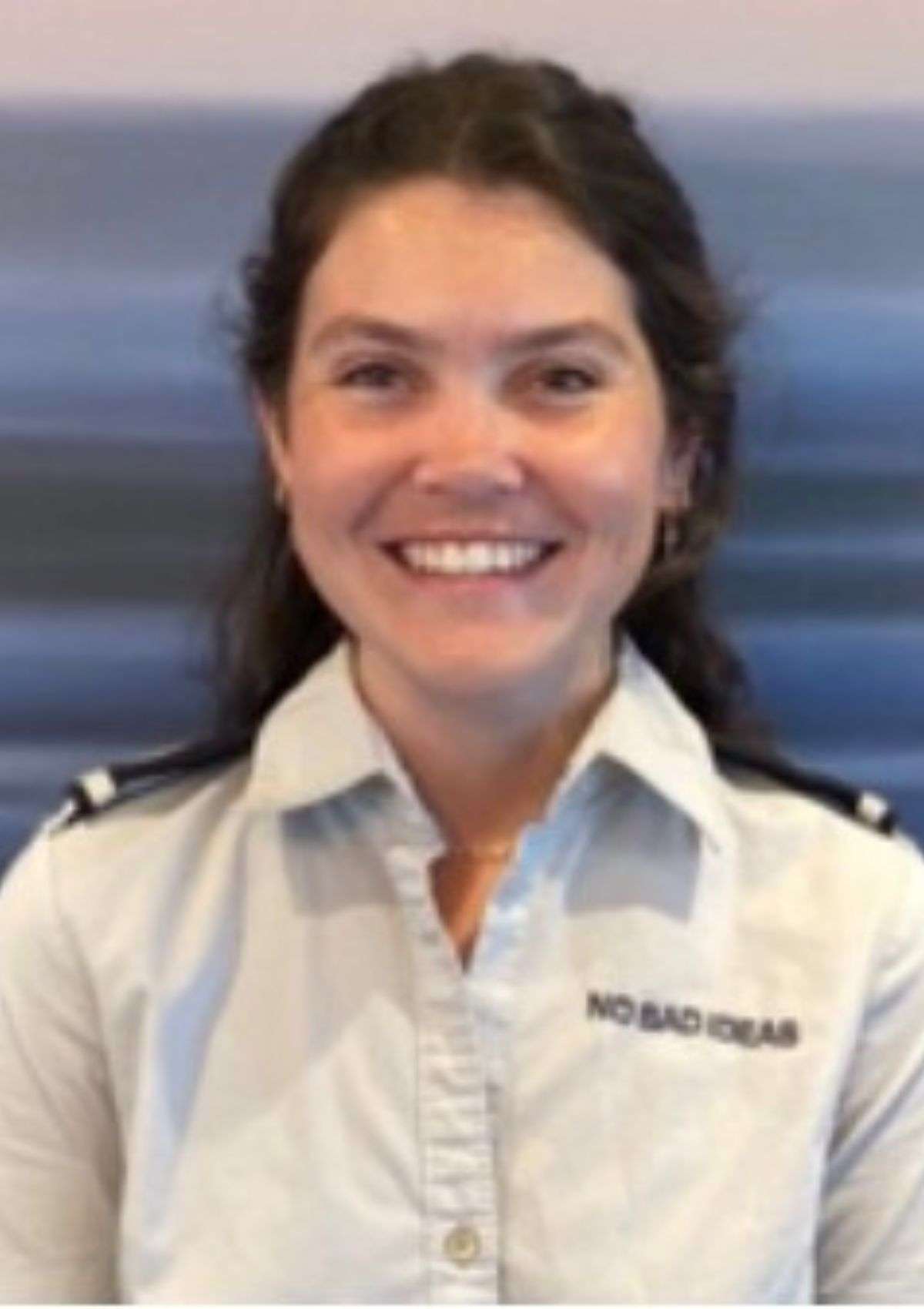 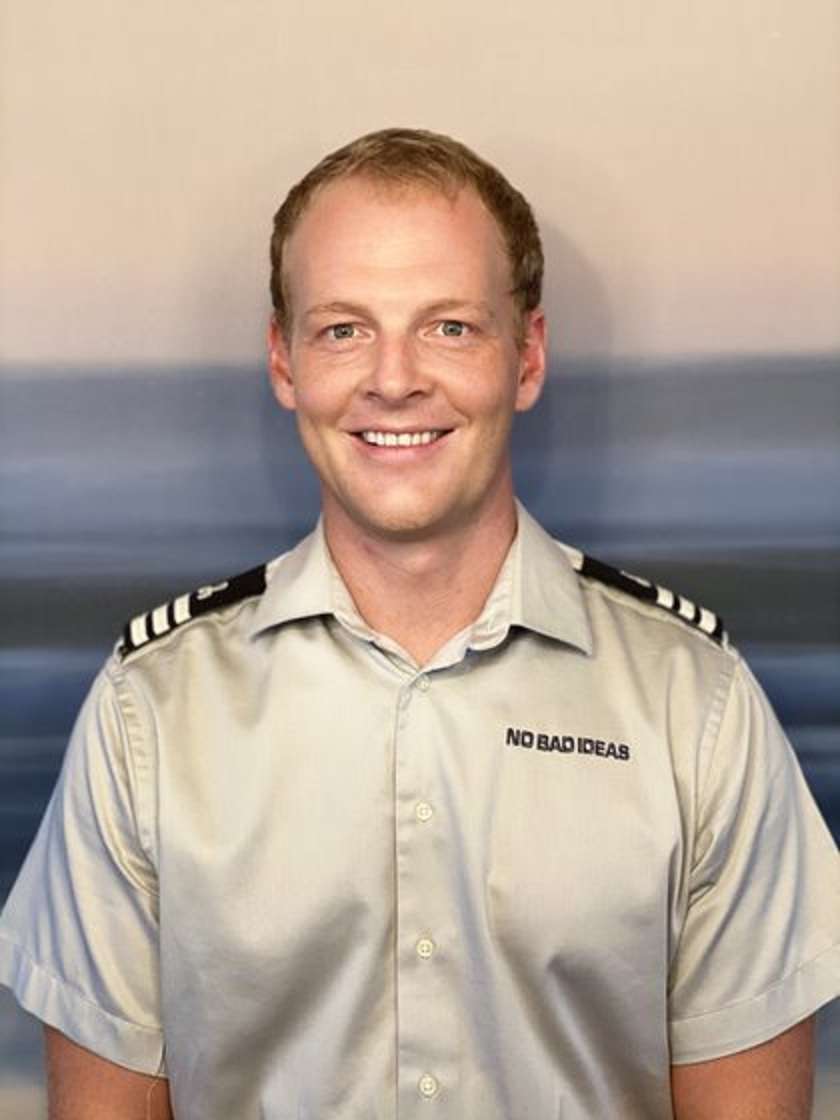 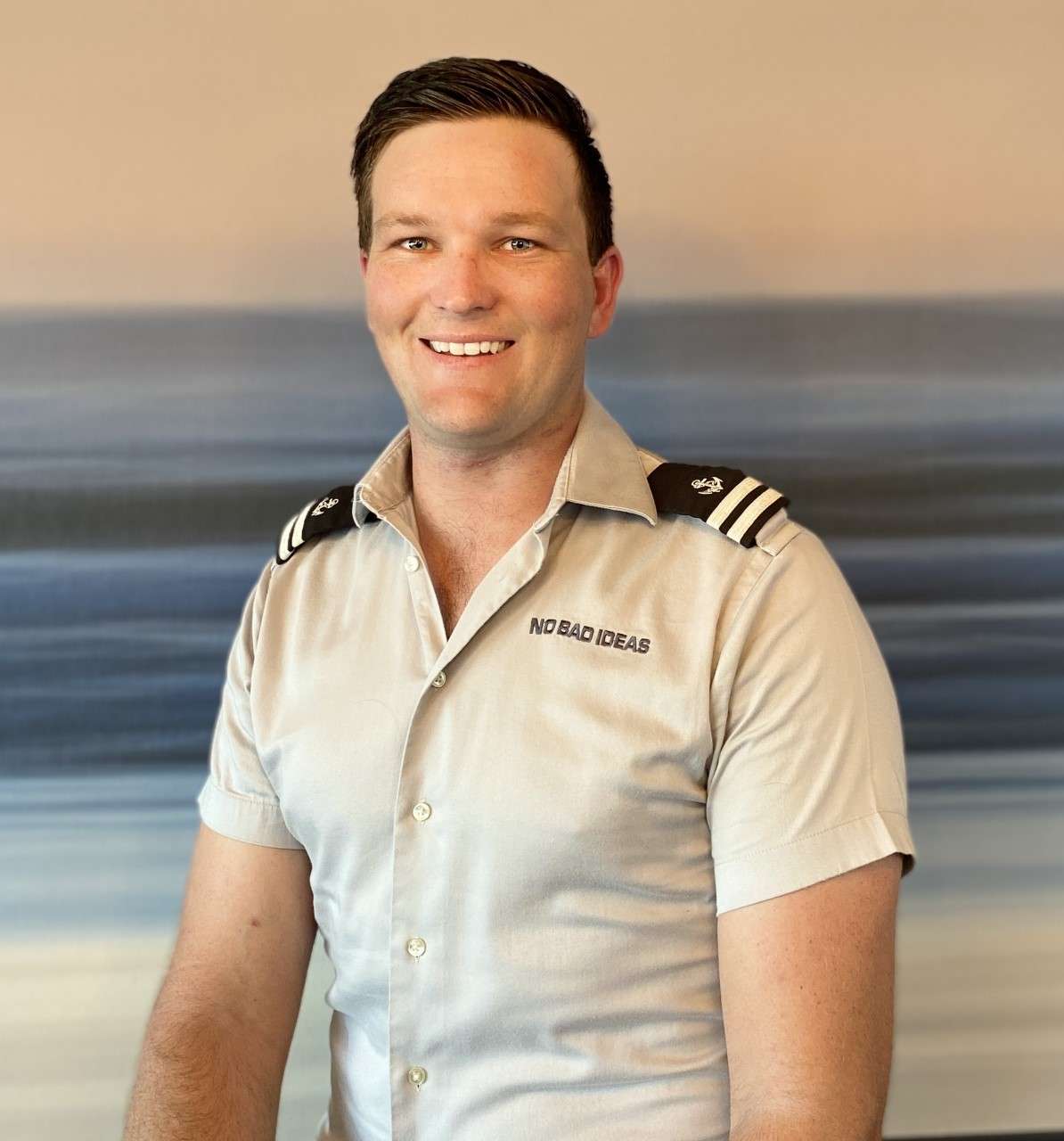